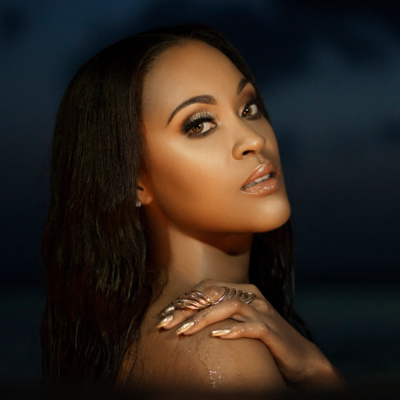 The gorgeous young singer was born Shontelle Layne on the beautiful island of Barbados, the eldest of three sisters, and still speaks with an intoxicating West Indian lilt. While attending a high school, where she served as a drill sergeant in the Cadet Corps, Shontelle met and became friends with another young talent with dreams of making it big – her name was Rihanna.

After writing childhood stories with her sister and chants for her cheerleading squad in school, one of the first songs she wrote, Roll It Gal, found its way to Alison Hinds, another prominent singer in Barbados, where the song became a hit. At this point, Shontelle was brought to the world stage by the very same company that discovered Rihanna in Barbados. She went on to co-write Man Down, the sixth single lifted from Rihanna’s fifth studio album LOUD. Shontelle’s role on Man Down awarded her the title as a Grammy nominated songwriter. She released two well-received albums on Universal Motown, Shontelligence and No Gravity including hits like Impossible, T-Shirt, Stuck With Each Other and Say Hello To Goodbye.

Estella Dawn, New Zealand born, US based pop artist, singer, songwriter, producer and multi instrumentalist, Estella has the skills to not only have a creative vision but to guide that process through to a cohesive, fully formed, song. Her songs are often about empowerment and confidence and span various genres, reflecting the artist's skill and diverse creative output. She has organically grown her career and following with a consistent release of music that resonate with the personal reflections on life […]