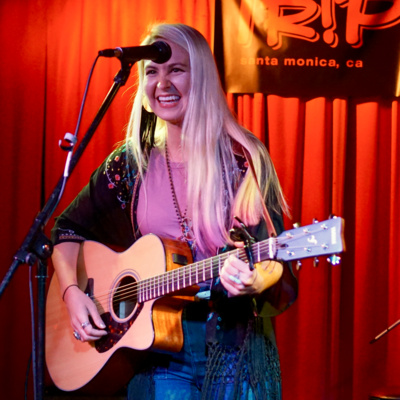 Kendra Muecke is a singer/songwriter, writer, actress, model, and published author performing musically as a solo act under the name “Kendra & the Bunnies”. Based in Los Angeles and born in Houston Texas, her mission is to create art that reflects society’s positive aspects back onto itself, causing a ripple effect that expands as it is heard. Her intention is to share healing via collaborative experience and understanding through performance. She is for the peaceful gathering of community through means of song, voice, and action; improving the planet one note & one poem at a time. Through music, Kendra & the Bunnies combines song, spoken word, theatrical staging, and healing ritual to transpose the audience into a mystical-surrender of now.

Kendra & the Bunnies’ sound combines the musical notes of singing, poetry, guitar (electric and acoustic), percussion, medicine drum, and electronic samples. Kendra has self-titled her genre “Celtic Americana’ that chants from the valleys of Folk, Western-Rock, and New-School Blues”. This brings the listener into thinking about where the roots of folk-americana were founded. There is a lot of storytelling prevalent in the creation and continuation of our country, the key is recognizing what stories we as a society cling to and why.

Her style has been said to remind listeners of Grace Slick from Jefferson Airplane if she were to be singing Grateful Dead songs. It’s like Joni Mitchell and Stevie Nicks sat down to play a game of poker and Neil Young were the dealer.

Kendra & the Bunnies’ first album, “of Vinyl” debuted on July 5, 2019. “of Vinyl” is a singer-songwriter approach to the allegoric heartlands of love. Her second musical body of work is the EP, “of Always”, released on September 6, 2019. “of Always” is an ode to the muse in the moon, singing she will always listen, relate, and respond. The first single from her third album release, “of Thank You”, is titled Silent Sleeper and hits stores February 6, 2020. “of Thank You” is being distributed by The Orchard (Sony Music Group).